Cartooning for Peace: The Art of Democracy – France-Atlanta – Together Towards Innovation

Cartooning for Peace: The Art of Democracy 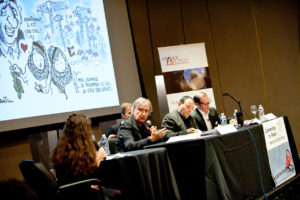 In the midst of various key political elections around the globe, growing chasms between different communities in our society, or global threats that breed fear, political cartoons create a valuable space for dialogue, reflection, and tolerance.

By their very nature of satire and irony, press cartoons evoked many questions: in the name of freedom of expression, shall we tolerate anything and everything? Is it possible to laugh about everything, with everyone? How can we combine freedom, responsibility and tolerance?

Inciting a smile, conveying a message, and making people think, the press drawing is an undeniable tool for dialogue and tolerance. This is all the work of awareness and education that Cartooning for Peace has been leading for 10 years. 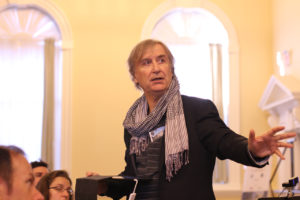 Two events were held in conjunction with this special night. First, “The Art of Democracy”, an outdoor exhibition of Cartooning for Peace cartoonists, was on display as part of ELEVATE, an arts initiative of the City of Atlanta – Mayor’s Office of Cultural Affairs.

Then, Atlanta Public Schools and Georgia Tech students also had the opportunity to hear from the cartoonists on October 12. 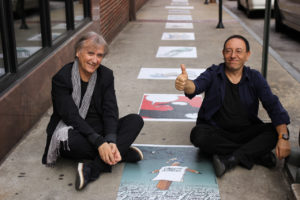 The event at Georgia Tech has been recorded; you can watch it Here

Cartooning for Peace is an international network of more than 140  dedicated press cartoonists from around the world who use humor as a universal language to promote freedom, understanding and mutual respect between people of different cultures and religions. Cartooning for Peace,  organizes conferences and exhibitions showcasing cartoonists’ works and expressions of peace. Offering a platform for people willing to challenge intolerance, dogmatism, prejudice and intellectual conformity, the organization has served as a tool to advance democracy and freedom of expression.

Plantu published his first cartoon on Vietnam War in the newspaper Le Monde in October 1972. His drawings were regularly published in the headlines since 1985.
In 2006, Plantu and former Secretary General of the United Nations, Kofi Annan (Nobel Peace Prize in 2001) organized a symposium in New York, in which Cartooning for Peace was formed. This association promotes freedom of expression for cartoonists around the world and counts already 130 members. Plantu has published more than 60 books of his press cartoon collection (Le Monde editions, Le Seuil).

Mike Luckovich published his first drawing in 1984 in The Greenville News and works as an editorial cartoonist for the New Orleans Times-Picayune. Since 1989 he has published in The Atlanta Journal-Constitution, News Week and The New York Times. In 2006, he received two of the most prestigious prizes: the Pulitzer Press Cartoon Prize and the Reuben. One of his cartoons which asked whether Michael Jackson went to heaven or hell after the death of the star sparked a major controversy.

Michel Kichka is one of the most famous Israeli caricaturists. He was born in 1954 in Belgium and moved to Israel where he studied graphics from 1974 to 1978. Since then, he has worked as an illustrator, a comic book artist and a cartoonist. He works as an editorial cartoonist for Israeli TV channels (Channel 2, Channel 1, i24news) and French TV (TV5Monde) and he draws frequently for Courrier International and Regards (Belgium). He has been also a teacher at the Beaux-Arts of Jerusalem since 1982.

“The Art of Democracy” Exhibition @ Elevate
When : October 13-21
Where : Downtown Atlanta, Broad St. SW near the Mammal Gallery.

*This event is reserved for APS “Cultural Experience” students and students, faculty and staff of Georgia Tech.

This France-Atlanta 2016 event was made possible with the support of the Raymond F. Schinazi and Family Foundation, Cartooning for Peace – America and our partners: