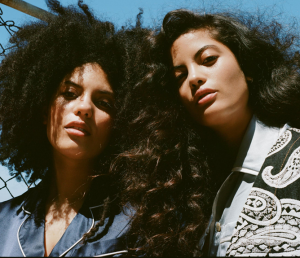 Franco-Cuban duo Ibeyi will perform at the Variety Playhouse on October 30th as part of their North American tour. The daughters of venerated Cuban percussionist Miguel “Angà” Diaz, Franco-Cuban twins Naomi and Lisa-Kaindé Diaz have gained international acclaim in their own right for their unique sound. The pair even made a cameo in Beyonce’s Lemonade video and their single “River” has nearly 10 million hits on Youtube. Their self-titled début album (XL Recordings 2015), combines elements of hip-hop, jazz, and soul with electronic beats and traditional instruments, and is influenced by both the Afro-Cuban musical tradition of their father and their Parisian upbringing. Their songs feature vocals in French, English and Yorùbá, a Nigerian language imported to Cuba via the slave trade in the 18th century. The duo’s name, Ibeyi, is the Yorùbá word for twins. On tour in North America through November, they will perform at the Variety Playhouse in Little Five Points on October 30th in conjunction with France-Atlanta 2017. Tickets are available through the Variety Playhouse website.

This France-Atlanta event is presented in parternship with: