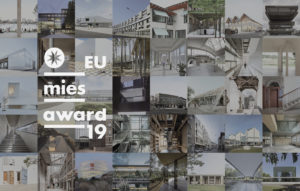 During the exhibition opening, Ivan Blasi, curator of Prizes and Programming at the Mies van der Rohe Foundation, will give a public lecture about the finalists and shortlisted projects of the 2019 EU Prize Mies Award. A second exhibition, at the Cohen Gallery, will situate the EU Prize Mies Award within the European cultural, political, and architectural contexts, from its beginnings in 1988 until now.